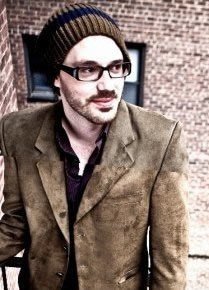 Ryan Scott Oliver is a 2009 Jonathan Larson Grant recipient and wrote the music and lyrics for Mrs. Sharp, the song cycle Out of My Head, Quit India, and the music for Angus Oblong’s The Debbies. A collection of his work, Rated RSO, has been seen across the country. He is a 2007 Dramatists Guild Fellow and the recipient of numerous awards including the first-ever ASCAP Foundation Harold Adamson Award for Excellence in Lyric Writing, the Margo Lion Award for Excellence in Adaptation (Mrs. Sharp), the Looking Glass Theatre Favorite Production Award (Out of My Head) and the John Denver New Composers Award. He is currently developing 35mm, a multimedia musical exhibition based on photographs by Matthew Murphy. More at http://www.ryanscottoliver.com/.

UF Review: When did you first know you wanted to write music? Have you always been set on following this path?

RSO: I remember becoming magnetically attracted to sheet music in 7th grade, and began working with music around that time, too.  I say “working” because I wasn’t yet educated enough to write, but I would make lyrics to other composers’ songs and even make book musicals out of their work. I recall that in 11th grade I wrote a fairly good “poem” (it was a lyric) out of Poe’s “Tell-Tale Heart”… and I remember thinking, I like this, I can do this… and that same year I started work adapting Miller’s The Crucible into a brilliantly ill-fated stack of paper which now resides hidden away in my childhood bedroom.

RSO: I like that you said, “negotiate” and you didn’t ask the age-old question, “Music or lyrics first?” For me, composing words and music is a constant negotiation, a constant collaboration between the two parts of my brain. Fortunately, with only one ego involved, there’s not really much fighting… and after one begins (usually it’s the musical side identifying a “sound world”) the other takes a stab, and they alternate making small steps until at last the whole thing is complete.

UF Review: What does your revision process look like?

RSO: Because I build songs like they’re houses, once a structure is set and a draft (the walls, as it were) has been established, I don’t often make much global revision. Instead, there will be tweaks to the smaller, decorative parts — a few notes or chords here, a word choice or a phrase there. Of course, once the whole thing is done, I’m more likely to realize the whole thing is wrong (and scrap the thing) than realize a large section requires substantial revision.

UF Review: Where do you find inspiration? How would you describe your work? What do you aim to achieve?

RSO: I find inspiration in good art, and there are artists whose work constantly inspires me in the sense that I feel we may be aiming for the same thing. Quentin Tarantino and Tim Burton in films; Ayn Rand and Stephen King in literature; John Baldessari and Francis Bacon in visual art; and of course in musical theatre, Stephen Sondheim will always be the pinnacle of inspiration. Though there are writers in the generation immediately before mine, such as Michael John LaChiusa or Tom Kitt, with whom I feel a sense of commonality. There’s a size and a range to all of these creatives’ work — grotesque and beautiful, chaotic and pleasurable, which attracts me to them and informs the things that I do in my own turn.

UF Review: You seem to be quite fearless in your writing; I’m thinking of Darling in particular, and even Mrs. Sharp. You seem to have no problem exploring the stuff of sex, drugs and insanity. What prompts you to take such risks? Is it even a risk, or is it necessary for you and your art?

RSO: When I find a narrative which I feel has not been translated into musical theatre, I get very excited and try to snatch it up as quickly as I can. In the case of Mrs. Sharp, the story (of a teacher desperate to become a media celebrity who seduces her student into killing her husband) had never been musicalized, and my collaborator Kirsten Guenther and I had a riot of a time putting that onstage. As to Darling, book writer B. T. Ryback wanted to tell a story of an innocent 20’s girl who falls in love with the wrong man (and the wrong crowd), and learns to grow up… it was a unique, original story that we paired with the familiar Peter Pan, the ramifications of which make it even more controversial. I don’t have much interest in writing a story I could live myself; I want to be transported, and I think audience members do, too.

UF Review: What does it feel like to see your work performed?

RSO: Surprisingly, it’s anti-climactic. The greatest thrills I have as a writer come in three phases: the first, when the song is done and I can play through it myself; the second, when I have written it all down and orchestrated it; and the third, when I hear it played by the band with the vocalists, seeing and hearing it take shape firsthand. I love a good performance, but the performances are extremely secondary to the writing concluding and coming alive.

UF Review: Have you ever tried performing yourself? Why or why not?

RSO: In high school (the Los Angeles Country High School for the Arts), I was a voice major, and studied musical theatre and opera. In college (UCLA), I minored in voice before I gave it up. I have a decent voice — sort of “classic” sounding — but I have found it’s better to be a composer with a good voice than a composer who sings his own stuff. It’s more of a treat for the audience when I do (and I rarely do) and much less pressure on me.

UF Review: What’s different, do you think, about writing and performing? Is anything the same?

RSO: In many ways they are exactly opposites, where art is concerned. Writing is creative and performing is interpretative, which are related in that one cannot exist without the other, but essentially the tasks are very much different. Furthermore, the creator is always trying to make the task of the interpreter all at once color-by-numbers in that the creator is supplying enough information for the soul of the creation to remain present, but also challenging and workable in that the creator shouldn’t micromanage and suffocate their own work on the page, such that interpreters have nothing to offer and bring with their own art.

UF Review: I think the term prolific might apply to you. How do you keep yourself going?

RSO: You’re the first person to call me that, or perhaps I’m only now achieving that status! I used to say that “writing kept me from going crazy,” but I think that implies that writing is some sort of antidote to combat a neurosis. I think creation is man’s most basic, natural function, and I also believe that it, more than anything else, will lead to happiness. So, I aspire to create something (usually music and lyric) at least five or more hours every day. I also made a promise to myself a while ago to write at least one full-length musical a year, and that has worked out decently well. I know that not all of them will be produced in a first class sense, but nonetheless, it keeps the output going strong.

UF Review: For anyone trying to “make it” in the world of theater or songwriting, what advice would you give them? Have you done anything that you look back on and wish you did differently?

RSO: The writing job has more to do with a “job” than with “writing” and that’s a beautiful, beautiful thing. That means:

UF Review: As a songwriter, where do you want to go? What’s next?

RSO: World-domination, by way of showtune.

Filed Under: Music, Talking with Furniture