Dani Shapiro is the bestselling author of the memoirs Devotion and Slow Motion, and five novels including Black & White and Family History. Her work has appeared in The New Yorker, Granta, Tin House, One Story, Elle, The New York Times Book Review, The Los Angeles Times, and has been widely anthologized. She has taught in the writing programs at Columbia, NYU, The New School and Wesleyan University, and she is co-founder of the Sirenland Writers Conference in Positano, Italy. She is a contributing editor at Travel + Leisure. She lives with her family in Litchfield County, Connecticut. More at http://danishapiro.com/.

UFR: Your most recent memoir, Devotion, is now a National Bestseller. How would you describe the book? When did you start writing it? What inspired its inception?

Shapiro: Devotion was a surprise in the sense that I had not intended to write another memoir —ever again — after Slow Motion. I think of myself first and foremost as a novelist. And so when I realized that not only did I want to write another memoir, but I wanted to write a memoir about my apparent spiritual crisis and search for something to believe — well, it was horrifying. I don’t like spiritual memoirs, as a rule. I don’t even like the term. But I had moved from the city to the country with my family, I had a young son who was asking me what I believed, I had been raised in a religious family and had fled it, my parents were both dead — and for all these reasons and then some, I felt that I had to excavate, really dig into my history, my family, and my present — I had to write about the journey from inside the journey itself. I had to write it as it was happening. Which was, of course, terrifying, and in complete opposition to the advice I usually give my students about writing memoir, which is: make sure you have distance. Write from the wisdom of retrospect. I had no distance, no retrospect.

UFR: For you, why is it important to trace your spiritual journey?

Shapiro: In addition to the reasons I just mentioned, I also had stumbled upon something Carl Jung had written: “Thoroughly unprepared, we take the step into the afternoon of life. Worse still, we take this step with the false assumption that our truths and ideals will serve us as hitherto. But we cannot live the afternoon of life according to the program of life’s morning; for what was great in the morning will be little at evening, and what in the morning was true will by evening have become a lie.” I read that and it gave me chills. (By the way, Jung defines midlife as age thirty-five and up, in case you were wondering.) I was acutely aware of being — in my early forties — taking the step into the afternoon. Unprepared. I wanted to try to prepare myself.  To understand what tools I would need. To let go of what no longer served me — but also, to find teachers and rituals that would help me to navigate this next stage of life.

UFR: Elsewhere, when talking about Devotion’s relationship to your first memoir, Slow Motion, you’ve said, “Slow Motion is a memoir about my twenties. Devotion is a memoir about my forties. I think each is emblematic, in a certain way, of what those life stages are all about.” But is anything the same? Was it hard to pour your personal life into yet another book? Was it easy?

Shapiro: Devotion and Slow Motion are very different books. Slow Motion is a story of one very difficult year in my twenties. When I first started working on Slow Motion, I was having a really hard time because, as a novelist, I didn’t know how to embark on a memoir. One day I was taking a walk on the beach my friend Melanie Thernstrom, who is a journalist and memoirist, and she turned to me and asked; “Well, have you outlined it?” As a novelist, outlining would never occur to me. I find the story as I go along. It emerges. But in memoir, the process is quite different. A lightbulb went off, and by the end of that day, I had written an outline which eventually became Slow Motion. I realized that of course I know what happened. The art was in figuring out how to tell it. 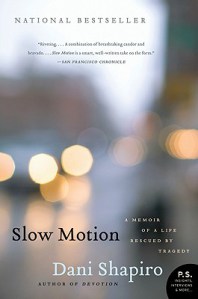 UFR: You’ve also written five novels, among them Black and White and Picturing the Wreck. How do you approach the two genres, fiction and nonfiction? For you, what are some similarities between the two? What are some differences? In writing, is your overall process the same?

Shapiro: Writing fiction exercises a very different muscle. Writing from the imagination is fundamentally different from accessing memory. In one, there is complete freedom. Anyone can walk on (or off) the page at any time. The writer can try anything — any high wire act — with no regard to the facts, or the truth, but with fidelity only to whether it works on the page. In memoir, the road to the story is a much more narrow one. The art is in the telling. In choosing what to leave out, what to put in. In the language, of course. In detail. But one is always aware — or should be aware, anyway — of hewing to memory. You can’t make it a dark and rainy night just because it would be more dramatic.

UFR: Something so distinct about your work, I think, is the ease (at least, it seems to be ease) in which you pull the reader into your world. The worlds of your works are just so real, so tangible. Is this a skill that comes naturally to you?

Shapiro: Thank you for saying that. I don’t consciously try to pull the reader in. But I always have lived in fear of boring the reader. And even though I try not to think of “the reader” per se as I’m writing, there is a kind of seduction in the act of setting words down on the page and hoping someone will want to follow them, will not put the book down, will stay up way past bedtime to find out what happens next.

UFR: What does your revision process look like? How would you describe the writing life?

Shapiro: As a graduate student I lived in fear of revision. Now I quite like it. As I’m working on a first draft, I tend to polish as I go — which is both a good and bad thing. It means I end up with a very clean draft, but it can also mean that I end up needing to toss perfectly good scenes or moments if they don’t serve the greater story. But really, until I have a draft, I don’t think I have anything to work with at all. That story about Michelangelo sculpting “David” and how he described the sculpture already being embedded in the marble… well, for a writer, the blank page isn’t the marble. The blank page is just blank. The first draft is the marble. And then we can truly begin.

As for the writing life…it sure isn’t for the fainthearted, but I wouldn’t have it any other way.

UFR: As a writer, what do you aim to achieve?

Shapiro: I don’t know that I’ve ever thought of achievement. I try to get better with each book.  I try to compete only with myself. I hope that I’m amassing a body of work that will touch others, will hopefully outlive me (don’t we all want that?) and that will have a kind of coherence to it. Always, I’m hoping to make sense of myself, my history, the moment I’m alive in this world. 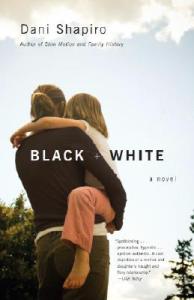 Shapiro: I love to teach. But I’ve always tried to be a writer who teaches, not a teacher who writes. The balance is a delicate one. I’m my best as a teacher when I’m writing well, and I can share some of what I’m learning in the trenches of my own creative process with my students.  I do think teaching helps my work in the sense that it forces me to articulate things about craft, about process, that otherwise remain somewhat hidden. One doesn’t want these aspects of craft too illuminated, because that can create self-consciousness — but at the same time, it isn’t bad to think about the nuts and bolts once in a while.

Shapiro: I’m reading a really lovely novel by a former student of mine from the MFA program at NYU, Ann Napolitano. It’s called A Good Hard Look and it’s about Flannery O’Conner and her world. It’s Ann’s second novel, and it comes out this spring. It’s such a joy for me when my students publish books.

UFR: Besides writing, what are some of your interests and hobbies? Do these activities influence your writing?

Shapiro: I practice yoga and meditate, which are very much a part of my writing process. Both yoga and meditation allow me to press the reset button in my mind. This noisy, noisy world we live in, and that writers must live in today, with Facebook and Twitter and endless emails and just huge amounts of stimulation…I find are balanced by my yoga practice. Nearly every day, when I’m home and having a regular writing day, at some point I unroll my mat and do my thing. When I come back to the page, it is with a refreshed and much less addled mind. I also have played classical piano for many years, and even though I don’t sit down as often as I would like, I find that playing the piano is very good for my mind — and for my nervous system — as well. Interpreting a piece of music is such a pleasure. And finally — most importantly — family life. It’s not an interest or a hobby — it’s at the heart of everything for me. I am a writer and a mother and a wife.

UFR: This brings me to one of my favorite questions to ask, does writing inform your life or does life inform your writing?

Shapiro: How about both?  Can I answer that way?  I only understand my life through my writing. I understand what I think, what I feel, what I fear, what I know. But my life certainly informs my writing; it seeps in and becomes my subject matter.

Shapiro: I think we either are writers or we’re not. And people who aren’t should certainly go do other things, easier things, more lucrative things with their time. I think I probably wouldn’t have been stark raving crazy if I hadn’t become a writer. I’m grateful every day (whether I know it or not) for the privilege of being able to set words down on the page, organize my internal life through writing, and have what I write connect with others. What a privilege. As for what I dislike, I’m not sure I can say I dislike anything about writing. There are things I dislike about the business of writing, but that just goes with the territory. As far as the creative process goes, sometimes it’s torturous. Okay — often, it’s torturous. But the aliveness, the pleasure, the satisfaction in getting it right? There’s nothing like it.

The Wild and Silent Places: A Talk with Cheryl StrayedIn "Talking with Furniture"