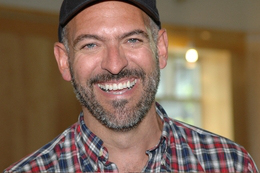 Paul Lisicky is the author of Lawnboy, Famous Builder, and the forthcoming books The Burning House (a novel, 2011) and Unbuilt Projects (short prose pieces, 2012). His work has appeared in Ploughshares, The Iowa Review, Five Points, StoryQuarterly, Gulf Coast, Seattle Review, Black Warrior Review, and has been widely anthologized. A graduate of the Iowa Writers’ Workshop, he is the recipient of awards from the National Endowment for the Arts, the James Michener/Copernicus Society, the Henfield Foundation, and the Fine Arts Work Center in Provincetown, where he was twice a fellow. He lives in New York City and Springs, New York, and has taught in the graduate writing programs at Cornell University, Rutgers-Newark, and Sarah Lawrence College. He currently teaches at NYU. More at http://www.paullisicky.com/.

UF Review: Your forthcoming novel, The Burning House, is already getting a lot of buzz. How would you describe the book?

Lisicky: The Burning House is about a man whose life unravels, for good and for bad, once his sister-in-law moves in. It’s in part about grief, it’s in part about disruption and growth. It’s also a book about sex, how sex can both sustain us and take us off-kilter. I’ll be curious to see how it’s received. It’s the first time I’ve written an ostensibly straight narrator, and you’re up against the old stigma: can the gay actor play the straight romantic lead? But people have come a long way in the last few years. Minds have opened, and I’m having a good feeling about all that.

UF Review: Another forthcoming book, Unbuilt Projects, is a collection of “short prose pieces.” How do you decide whether to turn a narrative into a novel or whether it’s best to keep it short? What do you like about each form? Is there anything you dislike about the forms? Any constraints?

Lisicky: Just about all the pieces in Unbuilt Projects were written during the last two years of my mother’s struggle with dementia. She was in a state of mind where her reality was shifting every few minutes, and so the short form seemed authentic to how I was seeing at the time. Nothing felt sustained, nothing felt linear. Disjunction and disruption were the way. So that book needed to be a collage. It would have been false to write it differently. But it felt like the decision had already been made for me, and I just had to listen to it.

The book I’m working on now has two simultaneous linear threads, and the ongoingness, the cause and effect suggested by linearity, feels like it’s true to that work. I do like being able to go back and forth between the compression of the short pieces, and the sprawl of longer work. I wouldn’t want to have to be confined to any one mode.

Lisicky: I started out as a musician. I wrote music for many years before I turned to writing, so the sound of things is really important to me. I think I’ve allowed my work to be more sonically driven in the last five years, whereas the earlier work was interested in description. Honestly, I want the sentences to feel spontaneous, the way singing should feel spontaneous. I don’t want them to feel deliberate or too worked. These days, I’m after a sort of artlessness in the writing. The irony, of course, is that the artlessness comes with lots of work, lots of mistakes where the pitch is off. You do it over and over until it feels like it isn’t work.

Lisicky: I don’t want to reproduce what I already know. I’m only satisfied if I’m writing into a space that takes me out of habit, certainty — all those myths that tell us life is less complicated than it is. So the act of writing is really about moving toward bewilderment, as Nick Flynn would say. It’s not there isn’t great beauty in bewilderment. There’s something almost holy about it, if we think of the world as having more tones and colors than we thought.

UF Review: What’s it like to end one project and start another? Is it hard to leave something behind, to release it to the world? Is it easy?

Lisicky: It used to be harder. When you’re just starting you feel like you’ve emptied everything you know and feel into a project, and then what? That feels different after, say, book three. In part, that’s because each book might matter less. You realize you’re just contributing to an ongoing project. By the time you’ve signed the contract, gone through edits, looked at cover after cover, it feels less and less like yours. The book has a life of its own, and of course you want it to be seen, you want it to be meaningful to people, and yet… I might be making it sound a lot easier than it actually is. There’s a side of me that looks at this answer, and thinks, now, wait a minute.

UF Review: Do you write with an audience in mind or for yourself? How do you negotiate the two — audience and self — in the writing process?

Lisicky: I’m always thinking about the reader, but you can’t think so much about the reader that you’re writing outside the work, watching yourself speak and think. It’s an odd trick: to be entirely immersed in the work and to think about what the reader’s going to make of the work. I couldn’t begin to articulate how that’s done. I think it’s essentially about refining two different muscles, getting them to work together, in sync, so you don’t even know you’re doing it.

UF Review: Where do you look for inspiration? What first called you to write?

Lisicky: I feel aimless and cranky if I’m not making something. I’ve always needed to be making something, even when I was kid. To me it’s about making order, paying attention, doing one’s best to name the light and dark in every situation. It’s probably akin to praying, though I don’t mean to confuse things with that metaphor. Honestly, I just write what I need to. If we’re doing what we can to be present, there’s always some issue pressing on us, something that needs to be tended to, worked through. It also certainly helps to come under the spell of a new book, a new writer. Giving oneself permission to be fed by that.

UF Review: You currently teach at NYU, previously teaching elsewhere. What do you like about teaching? Does teaching make you a better writer? A better reader?

Lisicky: Teaching definitely makes you a better reader, and it can make you a better writer too. I think what I’ve learned about structure and meaning could only have come through thinking about those things in relationship to the work of others.

There’s nothing better than a good class — all these minds coming together on a common project: how do we help this story do what it already does, but much better? How do we make it sound like itself? There’s a beauty to that. And I love the classroom as a place of thinking in action. You come into the room thinking one thing, and you come out with your first thoughts revised, expanded. And we’re all a little more awake. (We hope!)

UF Review: If one of your students came to you and asked how to break into the writing world, what would you tell him or her?

Lisicky: I’d say to concentrate on the writing first. Write what you need to write, write what you love to write. The monolithic, old school publishing industry is crumbling in front of our eyes right now, and we don’t have to roll over on our backs and try to submit to it anymore. In its place there are already so many more opportunities to be seen: small presses, web-based publishers, etc. So I don’t think it’s going to be as hard to be published per se, but the work’s going to have to be stronger if it’s going to rise to the top. Think about how the web has changed the distribution of music in the last five years; it’s a lot more democratic, but there’s a lot more. So you have to be good. People do talk about good work; it’s passed around, and we have the channels to do that now.

UF Review: New York is such a great city — any favorite spots?

Lisicky: The city is stimulating; there are so many choices that I, at least, tune a good deal of it out in order to live a peaceful, orderly life here. I love walking on the High Line, for instance, but everyone loves walking on the High Line. I like to go, though, in the hour before it closes, after nine, and there you are among the trees, the river right there, the openings beneath buildings. The lights. It’s oddly restorative in a hyper-stimulating place.

My other favorite place: Coney Island. I love going to the beach in Coney Island, I love walking the boardwalk, walking out the Steeplechase Pier. There’s a wonderful building on the west end of the boardwalk that’s boarded up. For many years it was Child’s restaurant, then more recently it was Lola Staar’s Dreamland, a roller skating rink. It’s so full of soul; the outside is covered with stucco friezes of King Neptune and seahorses and fish. I could look at it all day and be happy.

UF Review: Outside of writing, do you have any hobbies? Any activities you enjoy? Do your writing and non-writing lives speak to each other?

I love going to the beach, I love taking day trips out of town. I was an okay runner for a while but I got out of the habit after an injury. Now that is very good for the writing, the way it frees up the mind. Physical exercise always seems to be very good for the mind.

Lisicky: This has been fun, thank you very much.