Big Feelings in Small Moments: A Conversation with Jason Anderson 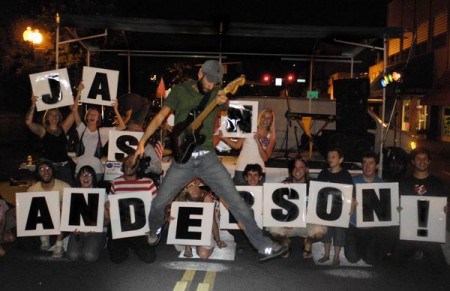 Jason Anderson is an American musician and songwriter. Formerly a member of Wolf Colonel, his recent albums include The Hopeful and the Unafraid, Life Sucks Love Sucks Dose Out, On the Street, New England, Tonight, Thug Poet and Summer Style. You can find him here and here.

UFR: I’m wondering if you can talk about your songs a little bit. A lot of them are like stories, or are stories. How do you choose what to write about?

Jason Anderson: Usually I just write about things that have happened to me, stuff I’ve been involved with, different situations, friends, etc. I try to express “big” feelings in small moments. I hope that people listening will simultaneously enjoy (appreciate?) the tiny details that make each story come to life, while relating to the overall vibe of what’s being sung about. Or something like that. (Simply enjoying the guitar riff or drum beat is completely rad and valid, too!) Anyway, it’s–for better or worse–all fairly personal. It’s difficult for me to make up songs about characters; I envy those who can do that so well.

UFR: Something so great about a lot of your music is that they’re unforgettable, and also simple. A lot of them have hooks and melodies that just stick. I’m thinking of different lyrics you’ve written, one-liners such as, “Whisper in my ear: We could disappear” and “I will wait for you and I always will” and “This will never be our town.” Where do those kinds of phrases come from? Do you come up with them and build songs around them or do you discover them as you’re working? And a more fundamental question, what does your songwriting process look like?

Anderson: That’s a great question. I find that, for whatever reason, my songs usually come out in one inspired burst, music and lyrics together. There are definitely exceptions to that rule–certain melodies or phrases that are already there–but for the most part it kind of…happens. (I know that’s a pretty/very weak answer, I apologize!)

UFR: As a writer you’re pretty prolific. You’ve put out eleven albums, and one of them was called A Song A Day. For that one, you literally wrote every day. What was that experience like?

Anderson: A friend sent me an inspiring e-mail about making things (and making things happen), and the importance of always challenging oneself. The song-a-day experience sort of came out of reading those words and wanting to try something semi-epic. I did that for three months or so. You know, I really like playing music and just try to–for lack of a more articulate “term”–stay at it. To that end, I love collaborating with friends and playing in other people’s bands, too. Those magic moments–however big, small, or in between–of doing something, creating something from nothing, are intoxicating, freeing, so…hmm…present. (Again, not an expert on any of this–not a philosopher–just a dude who gets excited about ideas becoming realities; there is so much potential in being alive!)

UFR: As a body of work, your albums seem to evolve. They’re all unmistakably yours, but have their own quirks and feel. Do you agree? If so, why do you think that happens? Despite any differences your albums may have, is there anything that stays the same?

Anderson: Well, I hope that with each one I get a little better at communicating whatever it is I am feeling with that group of songs. There is always the strong intentionality of wanting to capture something (energy, emotion, etc.), which, of course, is in tension with the reality that it’s a difficult task (for me) to do so. I’m learning, very slowly, it seems (at times). I think that on every recording there are moments that more or less totally work, and the goal is to keep finding those. It’s a search!

Anderson: I grew up listening to anthemic, sincere stuff like Bruce Springsteen and U2. (When I was really little, like a lot of kids, it was all The Beatles, all the time.) “Born in the USA” and “Rattle and Hum” were some of the first cassettes I ever owned. Of course, I was also influenced by Guns ‘n’ Roses, Nirvana, and other big movements that plowed through the mainstream. Smashing Pumpkins, Pearl Jam. (Then indie rock in college: Guided by Voices, etc.) These days I listen to all different types of music. I’m not certain of what, exactly, draws me in, but I think it’s passion. Music with soul. There has to be some sort of “meaning it” for me to be moved. But that can come in so many forms. My Morning Jacket, for example, is an awesome band.

UFR: Really, your performance style is distinctly your own. You conduct singalongs that could (and sometimes do) last all night, sing from what has to be your heart and tell people to come closer. Why do you like to get the audience so involved? Where do you get the courage to get up and perform like you do?

Anderson: Well, it’s been an evolution, for sure. When I started performing solo shows I would sit on a chair, often with a microphone, and just play my songs. Normal style. I’m not sure precisely when or how it started happening, but I can remember thinking there was probably a lot more possible than that fairly traditional dynamic. And little by little, show to show, tour to tour, I started experimenting with standing off the stage, eschewing amplification, engaging the audience, suggesting group vocal parts. A lot of that, pardon the term, “artistic growth” was coupled with me becoming less self-conscious and feeling increasingly comfortable in my own skin. And, to be honest, I’m still figuring it out. That’s one element of performing–and, to be certain, life–that I love: the constant growth and change. The non-stop shedding of skins (and fears). (I should also note that when I first started I was very much influenced by friends like Phil/The Microphones, Kyle/Little Wings, Khaela/The Blow, Adam Forkner/Yume Bitsu, Mirah, and the way they were challenging and pushing themselves–and audiences–to new places. I was lucky to be living in the Pacific northwest at that time.)

UFR: You play in houses, apartments, on college campuses, in parks, on beaches, on street corners, in driveways, anywhere where people will listen. As a musician, why have you made that choice?

Anderson: Some of it is nothing more than pure logistics. Wanting to visit a place where there is no “real” venue, and just making do, being creative. More often than not, though, it is a very intentional choice. I think that, especially for acoustic music, anywhere but a “real” venue is preferable. At least at the small-time level I’m at, where microphones aren’t necessary. Often those non-traditional spaces are the most conducive to the kind of connection and intimacy I find exciting. It’s interesting that in recent years more and more “real” (like, “big”) bands have started to play house shows. I think, maybe, people are realizing how wonderful they are, seeing a living room show not as a last resort, but as a desirable option. To me, concerts in unpretentious, unorthodox places aren’t incredible in spite of the environment, but, rather, the setting is part and parcel to what makes those moments so unique and real.

UFR: Now, out of curiosity I have to ask: Out of everywhere you’ve played, which has been the most unconventional?

Anderson: Let me see. That’s a fantastic question. Once, after a show in Brooklyn, some nice folks wanted to hear a few more songs, so we piled into my car, which was parked outside the venue. Two in the front, myself and two others in the back. It was raining outside, and we belted out a couple more tunes on the inside. That was fabulous. Truly invigorating.

UFR: What’s your best memory of life on the road?

Anderson: Ah, not sure how to answer that one. Every tour–big or small–is special in its own way. I feel lucky to have experienced so much, and look forward to the future. There is so much life to live, and it’s really on us–especially those of us who were lucky to be born into such relatively comfortable circumstances–to make the most of these days. If that sounds romantic or naive, so be it. But it’s not a cliche: You really do only live once. I’m excited to have this time.

UFR: What or who are some of your creative inspirations?

Anderson: In terms of “traditional” heroes: I am in awe of what Van Morrison was able to put down on tape. It’s a constant inspiration, listening to his records. On a more day-to-day level, I am always fired up by what people I know are doing, inside and outside of music. If you aren’t familiar with Strand of Oaks, I would sincerely recommend dropping everything (including reading this interview) to check him out. Ditto with a band called Warbles. Golden Boots, too. And please, especially if you live in Boston, go see Ette. They are outstanding.

UFR: Aside from music, do you have any other interests or hobbies?

UFR: As a musician, where do you want to go? What’s next?

Anderson: Finishing up some new recordings that I am excited about. Hoping to travel more this summer.

UFR: If you could give one piece of advice to aspiring songwriters, musicians or performers, what would you say?

Anderson: If you really believe in it–like, really–then keep going hard. Play for yourself and your friends. Don’t worry about how many people come to your shows. Go big always. Be awesome forever.

Anderson: Thank you so much for letting me a part of your online venture. It’s rare that I get the opportunity to think about–let alone share–my ideas on a lot of this stuff. I just really appreciate you thinking of me. If anyone is interested in finding out about upcoming shows or just being generally updated on my (somewhat regular) comings and goings, this is the best, most easy way to do so: http://www.facebook.com/pages/Jason-Anderson/64170803880.

Attention and Anger and Joy Wherever I Go: A Conversation with Robb ToddIn "UFR Presents"