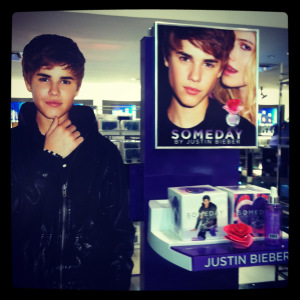 Baby, baby, baby. All the twelve-year-old girls in France like this pretty young man’s pop song, but not Marie, because she’s too cool.

The second day of my visit to her father, I give her a blank notebook and a tin box with pictures of bicycles on its lid, marooned items from my heavy baggage repurposed as friendship offerings. In my head, in English, I debate the etiquette of her father not telling me she even exists and also whether, now that she does exist, she will think me and my gifts are cool.

She huddles in a bundle of teen flexibility against the wall of the living room floor, knees close to her chest, writing in the journal with a pink fluffy-tipped pen.

I ask her questions in French about school and other nouns I know. Do you like music? What is the artist you like? Girls your age, do you like … le rock-and-roll? Pop?

She puts down the pen and looks at the floor and replies with slow confidence, her large brown eyes weighing the import of being a cultural ambassador to an American adult: Some girls, all the girls, they like the Bieber. Baby baby. But she, she does not like the Bieber. Et pourquoi pas? I ask. Because he is not sexy. He has not … sadness.

Her mouth pronouncing the word “Justin” – szhoostehn – floats in sonic contrast with the noise of her father’s three chickens roaming the yard outside. Les poules. Le pop. The smell of centuries-old stone forms a cool, unresonant quiet around us: the roof, the walls, the need for a sweater inside in summer.

The first night I am with them her father forbids us to eat dinner until after dark, which is close to midnight in the midwest of France in June. We assemble like a family around a broken patio table on the lawn beneath the wide summer sky. Around the horizons stretch humble fields of corn and rapeseed. Behind us, la maison – the stone farmhouse sits like a shadow under centuries of its own spidery disuse.

Marie’s father is a plumber, living in the house while renovating it for its English owner, with whom he is having an affair, who is an acquaintance of my cousin. His ex lives in a small city an hour away, with Marie, except when it’s summer. In summer, Marie sits quietly at her father’s table and coolly pushes the spicy dish I’ve cooked around on her plate before turning instead to chew baguette with butter and pickled fish.

A neighbor drives his truck up to the table, accepts a glass of pastis and a plate of potatoes, and refuses salad. That stuff is for Peter Rabbit, Pierre Lapin, he explains. He pulls a catalog from his jeans pocket to show us the new American tractor he is purchasing on credit.

Once we have examined the catalog, Marie scoops it up and crumples herself into her metal patio chair, feet up, deep into it like it’s a Seventeen magazine and she is me in my carpeted, heated, dinner-at-six living room a long time ago. The neighbor says she is pretty.

Her father drinks pastis and answers my questions about this struggling farm region, its microclimate, the chickens. After dinner, after the neighbor leaves, and after a certain amount of empty bottles littered the grass, his volume grows. He stops responding to my dwindling supply of inquiries and begins to speak in monologues, louder and sloppier.

Now he stands, smokes hand-rolled cigarettes, and gestures at the dark fields and the stars around us. His tone erupts anger, but also bitter humor and regret, and I can smell his body beneath his t-shirt. I can’t grasp his accent or enough French to be certain what he’s saying but I know enough to hear children and guns and fuck and American soldiers. War. Stories.

And to see how she lifts the glass from her father’s hand as he sleeps on the couch after drinking until he falls there, and tucks him in to bed while he mumbles and whispers below his own consciousness. Love. Songs.

She doesn’t like Justin Bieber, she likes tractors and horses. I realize much later that when she says “horses” – chevals – she means the horsepower in vehicles, not the animals you ride.

The next afternoon she is folded into herself on the wood slats of the living room floor again, knees up, back against the rocky wall, writing. When she sees me, she shrugs toward a stack of loose photographs on the coffee table, saying, these are the fotos of my father, her gesture half proud and half proprietary, a seasoned tour guide by now.

The photographs were taken in different years and locations, but all portray her father in various states of military service. In the photographs he grins, often posing with friends and beers, sometimes with a woman, but mostly there are men and cigarettes and the crumbled remains of towns and homes. Here he is in Yugoslavia among tanks and rivers, here in Chad among dirt and trucks. Here he is in countless barracks, shirtless on a dirty cot with a magazine, baring younger muscles and sweatier nights.

He is sexy, and also sad, like a man eating canned fish outside at midnight with only the dark arms of a broken house and the tamed land around him.

Manjula Martin’s work appears or is forthcoming in The Rumpus, Two Serious Ladies, Post Road, and Fugue. She has been an editorial assistant at Zoetrope: All-Story and a blogger at The Record Daily. Make bird sounds to @manjulamartin.