Review: The Body is a Little Gilded Cage 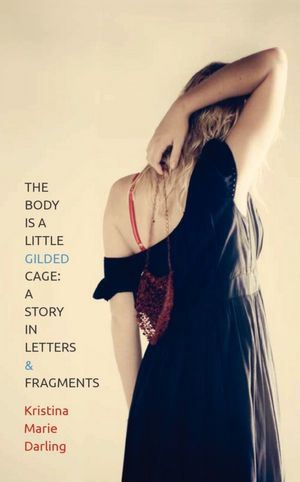 The Reviewed: The Body is a Little Gilded Cage by Kristina Marie Darling

The delicacy of the poems in Kristina Marie Darling’s collection, The Body is a Little Gilded Cage, is really quite astounding. Opening in seven sections titled “City Walk,” “Soiree,” and “Aviary,” and then leading into appendices and footnotes for each of these, many of Darling’s poems are no longer than a page. This means a quick read, but a deceptively quick read, as the textbook-like details of the collection suggest that we are meant to study, not just merely read.

Written with the letters of a woman undergoing psychoanalysis in mind, Darling’s poems nevertheless take on a life of their own, a character of their own. In “City Walk,” a woman’s observations of elegance become clouded by reality. In “Soiree,” her existence continues to unravel. And in “Aviary,” her life becomes a birdcage. The language in these sections is exquisite. In the latter prose poem, Darling writes, “Now the night has been opened like a box of exotic blue canaries & I’m brushing feathers from my long dark sleeves.” Language and imagery are Darling’s strong points; she knows how to evoke an image and how to make the reader feel like he or she stands in her character’s shoes.

After these lovely and fragile sections, I felt as if the delicacy of Darling’s collection began to unravel, spooling onto the floor in a pile of almost nothing. There is meat missing from the bone. That may seem like a counter-intuitive metaphor, but after the opening sections I wanted to fill up on more of Darling’s churning language. It feels like the beauty evaporates after those fifteen-odd pages.

What follows is an appendix—and footnotes—each striving to explain the aforementioned prose poems. While it fits the theme that Darling has established (a real-life woman treated by notorious doctors such as Freud), the analytical feeling shatters the fragility and beauty of the early words. I did not feel connected to anything reading the footnotes; rather, I felt lost in few and far between words, grasping onto nothing.

The final section of Darling’s collection takes the form of sentence or paragraph-long letters. Here, we return a bit to the earlier ephemera of the opening seven sections. The pages appear empty, but the ideas here are more lifelike than the textual analysis of the appendices and footnotes. The character again comes alive.

Overall, Darling is a talented wordsmith and wrangler of language. Even though I felt a bit isolated by the more textbook-like forms of poetry, that is not to say they do not work for the collection as a whole. The Body is a Little Gilded Cage is a beautiful little book. Despite some minor shortcomings, it is worth the read if only to spend sixty pages inside Darling’s mind.