Never Once Considering How In The World She Was To Get Out Again: A Mix For Going Down The Rabbit Hole by Marissa Landrigan 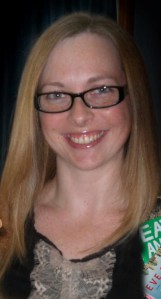 Marissa Landrigan‘s work has appeared or is forthcoming in The Rumpus, Guernica, Orion, Fringe, Diagram, Precipitate, and elsewhere, and she is a regular nonfiction contributor at The Nervous Breakdown. She received her MFA in Creative Writing and Environment from Iowa State University, where she completed a food memoir tentatively titled The Vegetarian’s Guide to Eating Meat. She currently lives and teaches in Pennsylvania, and blogs about becoming un-vegetarian at wemeatagain.com.

1. Shine a Light by Wolf Parade.

My goal in making this mix was to craft of list of songs that would sound crazy, that would, by the time the listener was finished, make her doubt whether she might not be a little nuts. This was because, at the time, I was feeling very much crazy. I had just finished a massive structural revision of my book-in-progress, and I was sleeping very little, and mostly in the afternoons. So the line here “I don’t sleep I don’t sleep I don’t sleep til its light,” evoked for me just that kind of bleary-eyed weirdness, where you can’t trust anything you see.

You could really pick almost any Tori Amos song for a mix to make you feel nutty. Her lyrics are imagistic, meant to create an atmosphere, not to make literal sense. But “Talula” brings all that crazy (references to Big Bird, Anne Boleyn, and a rape hat), along with the always-unsteady-sounding rhythm of a harpsichord.

4. The Crawl by Placebo.

There’s a darkness inherent in madness, the inevitable bottoming-out of the rabbit hole. Because at some point, you either hit the ground and break every bone in your body, or  you accept that falling down the rabbit hole is, itself, a permanent state, a purgatory of black motionlessness. This song captures that feeling for me, the way, in the darkest moments, that free-fall feels like statis.

The title image of this song – “fiery pianos wash up on a foggy coast/squeaky old organs have given up the ghost” – is so haunting. I picture myself, standing on a beach, watching a piano burn as thousands of little starlings fly, wings on fire, out of its hollowing body, and I think that must be what insanity feels like. Being let loose and on fire, the burn opening up and exposing our delicate charcoal bones, while everything beautiful we held inside tries desperately to get away.

A song so poppy and catchy you hardly notice that it’s about that tearing-your-hair-out, post-breakup, guilt-ridden communication with the ex. Now that’s a rabbit hole – the loop you get caught in when all you want to do is call each other, hate each other for still calling, throw the phone at the wall, then call back again, weeping. Not that I have any personal experience there or anything.

I could claim to be all deep and metaphoric here and say that a power trip is a kind of rabbit hole – getting sucked into the spiraling vacuum of self-importance and corruption. But truly, Chris Cornell’s crazy-ass scream at the opening of this track sounds just like the noise I make when writing is so intense I feel like banging my head against a wall.

8. Go Down Together by Film School.

Is it possible to go crazy together, to hold hands and descend into madness? I think so. I think Zelda and Scott Fitzgerald would tell us yes.

9. The Valley by Okkervil River.

The opening rhythm of this song reminds me of a pirate haunt, a sea shanty. Whenever it plays, I find myself dancing around doing this sort-of stomp-clap-stomp-clap gypsy thing which I would never allow another person to see. But then the end of the song comes, this maddening repetition of ten times ten then another ten times ten times ten times ten and you start to feel how easy it would be to get pulled into the rabbit hole, lured there as if by the pied piper, thinking you’re just dancing down.

10. Magic Rabbit by My Brightest Diamond.

I had to have some songs on here that celebrated the origin of the rabbit hole – Alice herself, chasing a magic rabbit, perpetually late. A rabbit – the symbol of weird, of a cheap, side-show mystery – and the panic of a constantly ticking clock. What a strange and frantic metaphor for descent into madness, delusion, hallucination.

Muse always feels wonderfully crazy to me – sometimes celebratory, sometimes angry – but this song marries the band’s space pop sound with a lyrical reflection on the nature of delusion. Whether you read the lyrics as a condemnation of organized religion, or politics, or just a generally over-consumptive citizenry, the idea of attempting to break down the walls that cordon off a closed mind feels right in keeping with the rabbit hole.

Many people know one Zero 7 song – “In the Waiting Line,” which was a part of the Garden State soundtrack – but the call in these lyrics to “cash it in and throw it all away,” reminds me of the familiar desire to sell all my belongings, get in my car, and find someplace where no one else lives. Sometimes we have to make our own rabbit hole.

13. Everything Always Goes Wrong by A Place to Bury Strangers.

While the title of this song would suggest my decision to include it in this playlist stems from my being in a very bad mood at the time, it really is about the music. This kind of heavy, atmospheric noise rock is a fully immersive experience for me. I have to sit on the floor in the middle of the room and zone out and I’m just completely inside the wall of their sound, picturing furniture flying around an anti-gravity fight ring, feeling the floor give out beneath me.

Plus, the band’s name is a reference to Potter’s field. I can think of no better real-world rabbit hole than the blackness of the anonymous soldier’s grave.

This song is literally about a fucking carnival – “pickled punks, oddities, freaks, all in one ring” – and, as always, Cursive capitalizes on its ability to craft an enormous sound out of just four pieces, that screeches and squeals its way from one speaker to the next, completely throwing the listener off balance. Plus, lead singer Tim Kasher does this awesomely weird wowowow noise that sounds like some combination of microphone feedback and that frog-croaking noise you make as a kid.

16. Jehovah Made This Whole Joint for You by New Radicals.

Honestly, I have no good excuse for putting this track on the playlist or really even for listening to the New Radicals past 1996. But I do still listen to them (even “You Get What You Give,” their single hit) and I did put this track on here, and I’m owning up to it in public. I guess I’m just crazy.

17. Heads Will Roll by The Yeah Yeah Yeahs.

Another nod to Wonderland. Many people think the Cheshire Cat or the hookah-smoking caterpillar are the trippiest parts of the rabbit hole. But for me, the Queen of Hearts, with her bizarro color obsessions, her upside-down flamingo croquet mallets, her blood lust – that’s scary stuff.

When I was seventeen, I was so into Nine Inch Nails, I used to fall asleep listening to The Downward Spiral. My parents were genuinely concerned about my mental well-being, but I maintain that this song is deeply peaceful. In a slightly-frightening, just-lay-down-in-the-snow-and-succumb, end-of-life kind of way.

Of course, the title here is another nod towards our heroine of Wonderland, but if Tom Waits’ isn’t the voice of the rabbit hole, I don’t know who is.

20. Terrible Love by The National.

I’d be lying if I didn’t own up to the fact that part of what was driving me so crazy when I  made this mix, deep in a winter freeze, was the completely illogical end of a particular relationship. This song encompasses all that – the dark black icy cold, the squirmy, spiders-under-your-skin sensation that is compulsively trying to decipher what went wrong. Most of all the insomnia:

And I can’t fall asleep / without a little help / It takes a while / to settle down my shiver bones / until the past subsides / It takes an ocean not to break.

Marissa’s playlist can be found on 8tracks, here.

Sara Lippmann's Read it Loud: "Bread and Jam for Frances"In "Read it Loud"