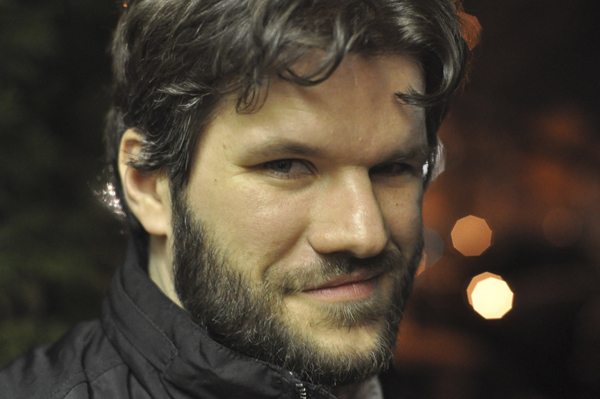 Matt Bell is the author of How They Were Found, a collection of fiction from Keyhole Press. His fiction has appeared recently in Conjunctions, Unsaid, and Ninth Letter, and has been anthologized in Best American Mystery Stories 2010 and Best American Fantasy 2. He is also the editor of The Collagist and can be found online at www.mdbell.com.

UF Review: Your new collection, How They Were Found, is getting stellar reviews. How would you describe your book? What do you like about short stories?

Bell: How They Were Found is a collection of thirteen stories, about a variety of characters: A cartographer making maps of a city that doesn’t quite exist, a military commander overseeing an arctic communications tower, a 19th-century preacher building a mechanical messiah, and so on. There’s a woman who finds a miniature doppelganger of her ex-boyfriend, and another who imagines the child growing inside her as a series of objects and animals. I recently told a reader in a Q&A that many of the stories begin with the protagonist taking on some new role — becoming a detective, say, or a father or a mother — and that the stories then becomes about their completion or exhaustion of that roles. That’s as good a description as any, I think, of what holds the stories together.

As for what I like about short stories: I don’t think there’s anything I don’t like. I think the short story is such an incredibly elastic and powerful form, able to hold so many different kinds of narratives and aesthetics. It’s really a phenomenal genre to write and to read, and I feel lucky to get to spend so much of my time as a writer and an editor and teacher working inside of it.

UF Review: Please talk about your previous work. Does one project lead to the other? Is there conversation between, say, The Collectors and How They Were Found? For you, how does one project end and another begin?

Bell: While I was writing the stories that would become How They Were Found — which included “The Collectors” — I found that I was carrying a lot over from one story to the next. There would be some stylistic or thematic element that would crossover into part of the next story, without exactly repeating or dominating the newer one. I think that actually helped the book hold together as a whole: That kind of crossover creates all kinds of little links throughout the book, especially since the stories aren’t ordered as they were written chronologically. That’s also how I knew when I was finishing the book: I started writing stories that didn’t have those links, that didn’t fit well with what had come before.

UF Review: I know it’s hard for writers to pick favorites, but I know sometimes authors write a story they’re particularly invested in and then say to themselves, “Man, can’t do better than that.” Has that ever happened to you? How do you overcome that feeling?

Bell: That’s an interesting thing to feel,  but I don’t know if I’ve felt exactly that myself. The goal is always to do the best thing I can do right now, and then to do something better. To me, there’s no point in just publishing stories and books, if they’re not going to be continually going after I haven’t done yet. I realize that — inevitably — there are going to be some stories and books that stand out above others, given a long enough view of my career, but for myself, in the moment, I’ve got to always believe I’m doing better than I have before.

UF Review: Your fiction is really exciting and in some ways, I think, innovative. What does your writing process look like? What about your revision process?

Bell: I generally write in the morning, every day, for a couple of hours. Unfortunately, there’s nothing too exciting about it: I tend to work for about three hours, listening to music if I’m drafting, or reading aloud if I’m rewriting. I tend to draft by going forward as often as possible, working sentence to sentence, and when I get stuck I take a big step back, maybe five or ten or twenty pages, and then rewrite forward again until I reach the end, where hopefully I’ll have a better idea of what to do next. If I don’t I back up and try again, and again, and again, until either I figure it out or I have to put the piece aside.

Bell: It’s so hard to pick a favorite thing about writing: I really do love almost all of it, from the large-scale invention to discovering a nice bit of acoustics in a sentence, from getting to know a character to the particulars of grammar and linguistics. It’s all of great interest to me, and all enjoyable and entertaining. Of course, the flipsides of all those coins can be all kinds of irritating and painful, but that’s part of the process. Maybe the worst thing is that, after all the work on my end is done, there’s no guarantee it’ll reach the right readers, due to all kinds of uncertainties that are part of the publishing process. That said, that’s just part of the insecurity that goes with any job: We all want to make a difference, and we worry we won’t. I just try to believe that if I keep doing better and better work, the writing will keep getting noticed by the people who need it. That’s enough.

UF Review: You’re an editor of a pretty reputable magazine, The Collagist. How does being an editor help you with your writing process?

Bell: I think it’s very easy to grow as a writer while editing a lot of other people’s work, partly just because the problems — and the solutions — are often easier to see in other people’s writing. So that’s a nice benefit. The other is that when you read a couple hundred submissions a month, you get a really good idea of what people are doing in contemporary literature, what fads and trends and so on appear in their stories, and then — if you’re like me — you try to avoid doing those things. What’s the point in being able to do something everyone else can too? Better to go after the parts of your writing that are the most unique. Reading submissions can help you find those things by comparison, I think.

Bell: There are dozens and dozens of magazines I love, but a couple of my favorites include Conjunctions, Unsaid, Willow Springs, Hobart, and Annalemma, in print, and then Wigleaf, Necessary Fiction, DIAGRAM, and PANK online. Of course, that’s just the beginning: I think there are more magazines of great worth now than maybe ever before, and I could go on and on. Probably the same thing is true about books, but some of my favorite writers would have to include Denis Johnson, Cormac McCarthy, Michael Kimball, Robert Lopez, Amelia Gray, Christine Schutt… I could go and on. One of the best books I’ve read this year is Tina May Hall’s The Physics of Imaginary Objects, which I can’t recommend enough, and Kimball’s How Much of Us There Was, which will be out next year from Tyrant Books, should be on everyone’s must-read list.

Bell: I love the independent presses: They produce most of the American fiction and poetry I’m really excited about, and that’s why I wanted my own books to come out on indie presses. I think the indies are capable of accomplishing much that commercial presses aren’t, because of their size and speed, and I think they tend to be more open aesthetically, because they are — and I realize these are broad, somewhat gross generalizations — they have a little less obligation to the marketplace. That said, the independent presses have a hard road to travel sometimes. I’ve talked a lot in the past about the potential for the indies to be the true heart of American publishing, but for the larger public to acknowledge that, the indie presses have to be better in every way than the commercial houses are: Better writing, better design, online better marketing, better service, and so on. And clearly that’s not the case everywhere, but the internet and the access to pro-grade design software and so on has really made it much more possible, and there are certainly some indie presses that I think are succeeding on every level. I’ve got a lot of hope for the next ten years or so, and I’m curious to see how it all turns out.

UF Review: Where do you want to go as a writer? What’s next? Any upcoming projects?

Bell: I’ve got a second book-length manuscript finished, and am rewriting a novel right now, so hopefully that will eventually become the third book. Other than that, I just want to keep making it to the chair every day, keep pushing myself as a reader and a writer and an editor.

UF Review: As a writer, what are you most thankful for?

Bell: “Most” is tough, but here’s one thing: When I was a kid, and I went shopping with my parents, we weren’t often allowed to buy toys or candy or any of the stuff kids always want (although of course we did sometimes get those things). What we were always allowed to get was a new book, and so we almost always did, and the end result is that everyone in my family is a reader. If I hadn’t read all those books as a kid, I don’t think I would have ever ended up here. It’s not like the kind of thing you discover late, or at least it doesn’t seem so to me. I don’t necessarily remember all the particulars of those early books, but I know I’m glad I got them, and if my parents hadn’t seen the value in that, then I wouldn’t be a writer.

UF Review: And oh, I almost forgot, a question I always love to ask: does writing inform your life or does life inform your writing?

Bell: It’s both, of course. The writing is part of the daily practice of living: It’s the first thing I do almost every day when I wake up, and reading is often the last thing I do before I go to bed. Similarly, one of the hallmarks of a good book is that when you get done reading it, you’re changed in some way, and I think that one sign that you might have written such a thing is that it changed you in the writing: It’s a beautiful thing to finish a book or a story or a paragraph or a sentence and realize that you’re not going to be the same person now, not exactly. By the act of writing, you’ve changed something about yourself, and there’s no going back now. That’s what I want, every single day: To slowly, by the writing of fiction, to become not just a better artist but a better human being. That’s what makes it worth doing, worth all the time and energy and effort. To do it for any other reason would be a waste.