Review: My Only Wife

The Reviewed: My Only Wife by Jac Jemc 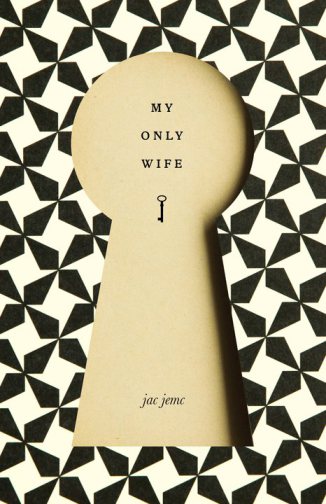 My hope is that people will find a page and read it. I hope they’ll fall in love with it and look for the book.

If you ever wanted to know what it was like to be married to your best friend – who also happened to be a complete stranger – then Jac Jemc’s first novel, My Only Wife, is a message in a bottle that’s disintegrated a little bit, one that has some seaweed and maybe a dead crab lingering along with the written word. It is almost just like the book pages the narrator’s wife drops from her apartment window, hoping a total stranger will find one and will become so enamored by the language that he or she will just have to find the whole thing.

Jemc writes from the point of view of the husband, crafting a story centered on a loving man and his eccentric wife who records the stories of strangers. Most every chapter begins with the phrase “My wife…”, creating a distanced perspective that evokes an Aimee Bender-like surrealism that creeps around the edges; we, as well as the narrator, never truly understand anything that is happening in the world. Anything at all.

Jemc wields a deft hand when it comes to penning beautiful phrases. In one gorgeous scene, the narrator’s wife begins smoking again. As the reader, we watch the husband watching his wife enjoy a cigarette, an experience that is so far removed it almost comes full circle and becomes a conjoined, united action. “I knew I should think it was ridiculous that [my wife] opened a window so widely, multiple times a day in December when the snow was beginning to accumulate. I was supposed to be even more disgusted by this in the morning. But I wasn’t. I liked the way she looked.” Here, Jemc’s narrator battles with himself over his own point of view: he knows how he should view the image of his smoking wife, but what he truly sees tells him otherwise; beauty triumphs over a filthy habit. Much of Jemc’s collection of scenes between husband and wife resemble this, with two perspectives battling against each other until neither overcomes, but a sort of neutrality develops that eventually settles into love — until that love is not enough anymore and the wife disappears.

This novel is lovely, with lovely phrasing and lovely characters and a lovely and strange understanding of the world. But there is still a sense of repetition that I could not shake while I was reading through the story. It almost seems too long, that fifty or even a hundred pages less would have been enough to suffice for the story Jemc tells between an overly loving husband and a progressively diminishing wife. The distorted timeline helps — we are never too far in the past or too far in the future to feel excessively distanced — but there is nevertheless a disconnect between character emotions and the emotions the reader is expected to feel for the length of an entire novel.

Despite its admittedly minimal flaws, Jemc has done something quite extraordinary with her first novel. She has created a world that is at once familiar and at once strange. Just as the husband can never quite get close enough to his wife, the reader can never quite grasp where Jemc is taking her characters on their journey. With that kind of ambiguity, who ever needs a happy ending?