Review: The Map of the System of Human Knowledge 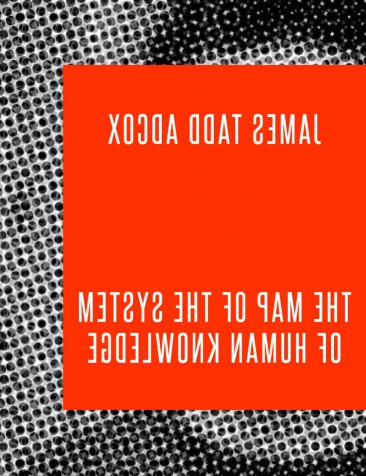 The Reviewed: The Map of the System of Human Knowledge by James Tadd Adcox

Is the beauty of the human brain the fact that we don’t know everything? Or is it the potential for us to know it all? James Tadd Adcox tackles those questions and many more that consider the processes of the human mind in The Map of the System of Human Knowledge. Within his pages, we get a chart of what is contained inside the brain, and how all of these subjects–from memory to philosophy and nature–combine to form a complete, functioning system. But the thing is, the map still does not lead anywhere, nor should it. Rather, Adcox provides the reader with a new way to view the life that surrounds us, as well as the life that lives inside him as well.

We open in memory. Why do we forget? Why do we remember? Why do we remember the horrible pain that comes from dropping something heavy on our foot but not where we last placed our car keys? In “History/Civil/Memoir,” we get a panorama of past, present, and future. The protagonist’s father calls him on the phone and he wonders why. Could he be drunk? He remembers his mother making treasure maps for he and his brother when they were younger, turning their neighborhood into an entirely new world. The future comes hurtling in when this man’s father has died, when his mother is in an assisted-care facility, when he is married. And then we are swept back into the past, back to when this young, college-age man would drunkenly call his father but never actually speak to him. These flashes and lapses in memory are striking in their beauty and in their realism. It feels like actual memory, like the reader, too, falls into the pattern of forgetting, remembering, drunkenly forcing certain things to be or not to be. Adcox works these maneuvers of the mind into striking vignettes that stick long after the pages of the book fade away.

We pass from memory into reason. Philosopher David Hume returns from the dead and brags about it; a religious man makes soup while pondering the larger theological meaning of making soup in the world; a man comforts his daughter, who believes a monster lives in the vacuum cleaner; and a father fears his daughter’s imaginary friend may actually be a predator living in their neighborhood. While these vignettes have less circuitous beauty than the memory section, they are nevertheless strikingly real. Especially in the imaginary friend story, “Philosophy/Science Of Man/Logic/Art Of Thinking/Apprehension,” the fear of one man becomes crystal clear. It is easy to see why he cannot believe in pure imagination, but immediately moves into fear and violence.

Finally, we arrive at imagination. In this final section, Adcox combines the beauty of memory and the logic of reason into the magic of the imagination. The author’s imagination proves to be something quite extraordinary, giving the reader pause into how much reality goes into something perhaps not quite real. In “Poetry/Profane/Theatrical/Opera,” a soprano begins singing on street corners to spread opera into her community. In “Poetry/Profane/Theatrical/Pastoral,” a Cyclops goes blind. And in “Poetry/Profane/Painting,” a man’s wife only paints miniature portraits. All of these surreal, tiny little stories are like those miniature paintings: an artist’s view of reality transferred to a canvas. In Adcox’s case, that canvas is the page, yes, but it is also the minds of his characters and of his readers. Everything is transformed into something new. Even though a map of sorts is created, the mystery is deepened, rather than solved. The treasure remains buried.

"What the Crow Does: A Lyric Essay" by Justin Lawrence DaughertyIn "Nonfiction"