Review: Last Call in the City of Bridges 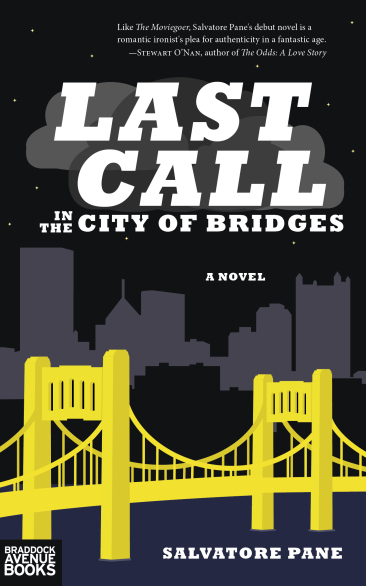 The Reviewed: Last Call in the City of Bridges by Salvatore Pane

Pittsburgh is obviously the best city in the world, and Salvatore Pane’s debut novel, Last Call in the City of Bridges, speaks right to my yinzer-lovin’ soul. The imagery is spot-on: there is the Squirrel Hill tunnel that opens onto that wonderful bend in route 376 where the whole skyline of the city explodes across the river; Gene’s, the literal hole-in-the-wall bar that has the best weekly beer specials in the college town of Oakland; and there’s the Cathedral of Learning, that beautiful, misplaced mass of a building that juts straight into the sky and declares that, yes – gothic cathedrals DO still have a place in modern-day education. But even if you have never been to Pittsburgh, or even if you hate Pittsburgh (sucks to suck, you’re probably going to hell), you will find something – something self-affirming, something embarrassing, something tragic, or even something slightly beautiful – to identify with in Last Call.

Available in November, Pane’s novel follows the superhero-like character trajectory of Michael Bishop, a post-grad in a dead-end job subtitling DVDs and stuck in a romantic lull. When Michael meets Ivy Chase – the daughter of a preacher who orates out of a strip mall – he falls head-over-heels into a pit of love, ending in a rock-bottom crash. The characters populating Michael’s life are both familiar figures of twenty-something ennui, but also something entirely their own. There is Oz, Michael’s best friend and roommate, a philosophizing genius who eventually decides to leave anything resembling civilization behind; Sloan, the beautiful friend-one-time-lover barista who spends here free time counting to 250,000 for the pleasure of online viewers; and Noah, Sloan’s boyfriend and all-around cheating asshole who Michael nevertheless finds himself drawn to. These people make you feel sad, and good, and self-important, because in one scene during a dinner party, amidst the hipster-laden talk and consumption of too much alcohol, you begin to think, “Well, that’s not me,” until you turn the page and, well, there you are.

The novel opens on the night after Obama’s win in the 2008 presidential election, a time when many people felt hope for the future to come, and because this scene precedes the main action of the novel, told several months prior, we do not know where Michael stands. Is he hopeful? Is he depressed? Is he waiting for the end of the world? The selection of this event sets the tone for the trajectory of the entirety of Michael’s story.

Last Call is absolutely laden with pop culture references; while this would be excessive and distracting in most contemporary fiction, Pane makes it work because he has given us characters who are exact replications of the people of our current generation. They are not just representations of the culture in Pittsburgh – they are representations of where we are now in the 21st century, and Michael’s struggle of where to go next emulates that queasy feeling of not knowing what the right direction is. We may be a generation of technology, Internet memes, and self-aggrandizement, but as Oz says to Michael, “ ‘There’s this ten year period that didn’t really exist before. The Odyssey Period some people are calling it.’” Pane’s novel shows that our culture has become something bigger than ourselves. His characters must learn how to scale this digital mountain before they even figure out what the hell to do with their lives.

This review began as an ode to Pittsburgh, and it will end as an ode to the promise for the continual production of stories that are worth telling. Last Call in the City of Bridges is a testament to the fact that the stupid Internet cannot wipe out what is really important: telling a story that needs to be told. It isn’t selfish, it isn’t self-important, it isn’t unnecessary; it is how we all must find our way. And if that way leads to Pittsburgh, then even better.

The Raw Naked Urge Of Just Being Alive: A Conversation With Salvatore PaneIn "UFR Presents"