Reflections from Illinois: The Fear

“I understand that fear is my friend, but not always. Never turn your back on Fear. It should always be in front of you, like a thing that might have to be killed.”

I believe in math, in the primacy of data.  I believed the polls in aggregate, the predictions from Nate Silver that Obama would win, perhaps not in a landslide, but by a comfortable and solid margin.  My mind believed these things, but deep in my heart, there was the fear.

On November 3, 2012, I am in line for early voting at the Matteson Village Hall for over three hours.  There are no parking spaces anywhere nearby, and the line stretches out the doors far onto the sidewalk, into the chilled morning air.

Then, lurking deep inside as well, there is the flip-side of the fear – irrational exuberance, misplaced confidence.  In 2004, Hunter S. Thompson wrote a short piece for Rolling Stone about the mounting wave of support for John Kerry, casting him as a sure winner and George W. Bush as an imminent loser.  It was the last magazine feature published before Thompson took his own life, just months later.

There is no race in our district whose outcome is remotely in question.

I have often wished that Hunter had lived to see 2008 and the meteoric rise of Barack Obama, from longshot primary candidate to Democratic nominee to president-elect.  Would he have embraced the promise of hope, the repudiation of cynical Nixonism?  Would he have seen it as a long-overdue triumph of good versus evil, or just another political thrill-ride?  Would he have been able to venture far enough out of his Woody Creek, CO bubble to really see it at all?

Yet here we all are in Matteson despite the low localized stakes, waiting for the doors to open, willing to stand in the cold for hours to participate in democracy, to exercise the rights that many take for granted.  Here there is the knowledge that these rights have not been easily bestowed, but fought for and won.  Here there is talk of voter suppression in Ohio, in Florida.  Here is the fear borne of the knowledge that there are those in this country who believe us undeserving, who would gladly strip those rights away.

Another alternative to the fear is quiet confidence and faith in this president, in this moment.  It is easy to forget the inspirational power of Barack Obama, after four years of grinding pundits, tea-party obstruction, and the audacity of Mr. Obama’s imperfection, his refusal or inability to make it all easy for us, to deliver instant gratification.

I imagine Hunter having some real fun voting for Obama, being part of a winning team based on hope and inclusion rather than fear and division.  Pushing the touchscreen with his name on it was one of the proudest moments of my life in 2008, and I didn’t expect pushing it a second time in 2012 to come close.

Cheers erupt from the voting area intermittently, and upon inquiry we are informed those are for first-time voters.  I find myself wishing I had a candidate to vote for my first time that inspired the level of conviction we all feel for Obama.  There is a real reverence here for the act of voting itself that is elevated by the candidate, both his policies and the very fact of him, here, now, in America.  It is fun, but it is a sacred fun, the earned fun of a job well done.

Here in his home state, we turn out though the result is assured because it is our duty to do so, because it is part of who we are as a community, because of love – for each other, for ourselves, for possibilities already realized and yet to come.  Against all odds, the button-push feels just as good this time, like an affirmation of the best within, a temporary transcendence of fear.

On November 6, 2012, I face down the fear all day then head home to watch the returns pour in.  The fear stays for a couple of hours, but soon reality penetrates, electoral math prevails, Silver pulls off the perfect game. The Senate and ballot measures for equality set the stage, and Obama’s reelection brings it home. I think of the smiles I’m sure are on the faces of all those I stood in line with that Saturday, fading in and out of sleep as Obama delivers his victory speech, all the sweeter for being hard-won, less now about the daring of dreams but the steely resolve to follow them. 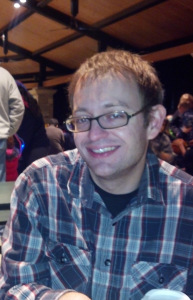 Neal Kitterlin is a poet who lives in Matteson, Illinois with his wife and daughter.  His work has appeared or is forthcoming in PANK, Metazen, NAP, Red Lightbulbs and other places.  Find him at infinitegestures.tumblr.com or on twitter @NealKitterlin.