Reflections from Virginia: Signifying A Hospital

The morning after the election, I walked three blocks to my nearest federal government institution, which, luckily for me, is run by the National Park Service—the Chimborazo Medical Museum, a unit of Richmond National Battlefield Park. The hospital at Chimborazo was the largest of the Confederacy’s medical facilities, and over the course of the war, over 75,000 men—usually the sick and those who had survived being wounded or having a limb amputated on the battlefield—recuperated in one of the dozens of wooden buildings at the top of the highest hill in the embattled capital of the CSA. The sky was overcast and gray, threatening to rain, and I could see only a few runners and dogwalkers on the park grounds.

It made sense to me to visit Chimborazo Hospital the day after President Obama was re-elected. Virginia was a battleground state this year. The two campaigns that saw the most Super PAC money dumped into them were the presidential campaign and Virginia’s Senate race, conducted between two former governors. Each day’s mail brought mailings from Crossroads GPS and the National Rifle Association, and by mid-October our television showed nothing but approved and unapproved election messages.

But it’s also the 150th anniversary of the time when Virginia was literally a battleground state—the day after the election was the sesquicentennial of Lincoln firing his notoriously hesitant general George McClellan after the latter’s failure to attack Richmond during the end of the Peninsula Campaign of 1862, in which the Union Army was held at bay by Robert E. Lee’s Confederates in a series of battles known as the Seven Days Battles.

Assuming that they survived the field hospital, some of the almost 16,000 Confederates injured in the defense of their capital city would have recuperated at Chimborazo. Although antiseptics and antibiotics weren’t available, the hospital did feature lots of fresh air and ventilation, more than most hospitals offered in those days.

None of the buildings remain. After the war, residents of the no-longer-besieged city tore down the buildings for the wood. The government—the United States government—built a weather station on the site, which later became the Medical Museum. It’s a nice place to walk now—my wife and I will take our dog there and look out over our city, trains rolling along next to the James River, the skyscrapers obscuring our view of the state capitol, the smokestack of the old Lucky Strike plant and the Confederate Soldiers and Sailors Monument lining up together at one point, Richmond’s history overlapping itself.

I guess I think about war a lot in Virginia. We live three blocks from the site of Chimborazo Hospital; to get to the grocery store, I have to drive past the markers for the outer ring of defenses for the city. I teach at a small university about an hour north of Richmond, where I can heat up my lunch and look out a window at preserved earthworks from which cannon fire cut down advancing Union troops. The anniversary of that battle is next month.

I came to Chimborazo the morning after the election because it was a site of war that was also a site of healing, of convalescence. Chimborazo Hospital had a remarkable survival rate—the Park Service estimates that less than 10% of the men who were sent there died. The United States flag flew over the Medical Museum, and on the grounds next to it, a pair of flagpoles flew the Confederacy’s flag (the second national flag) and a yellow flag, signifying a hospital.

There’s a lot of talk this morning about the defeat of the Republicans, how total it seems. Apart from them keeping control of the House of Representatives, there’s not much that my conservative Facebook friends are celebrating this morning. The pundits are scrambling to explain the defeat’s magnitude; Karl Rove melted down on camera last night, and the word I hear most in connection with Fox News right now is “schadenfreude.”

The Confederates used a white linen dish towel as a flag of surrender at Appomattox, carrying it on what must have been a very long ride from Longstreet’s grey line to Custer’s blue line. I think we are expecting that the Republicans will fly a white flag of surrender in response to the election; they must change or die, columnists say.

The flag I’m looking at this morning on a hill in Richmond, the flag I want to suggest we raise, is the yellow flag of the hospital. I don’t want this flag to suggest some kind of naïve “healing” after the combative election cycle, but instead the possibility of recuperation, of re-occupying ourselves in our homes for a while, of taking a break from all this. At their best, elections are incredible conversations about what America is and can become; this was not an election at its best.

When we are ready, then we can proceed. By the time the next election comes around, the sesquicentennial of the Civil War will be over, and we’ll commemorate 150 years since Reconstruction. The battleground states will be just as bitterly contested in four years, the advertisements more prolific. We should be ready.

But for this brief morning, on a hill in Richmond, Virginia, I am recuperating. I am taking deep breaths and walking around with no other purpose than to walk around. I am thinking about Hope and Forward and even Believing in America, and, remarkably, I am not thinking about war. 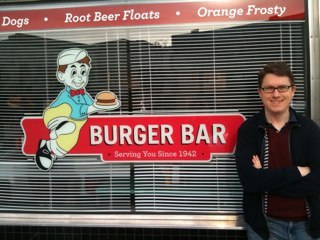 Colin Rafferty teaches creative writing in Fredericksburg, Virginia, at the University of Mary Washington. His prose has recently appeared in Witness, the Utne Reader, and #GOODLitSwerveAutumn.