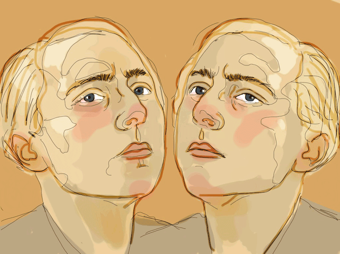 They found Peter in the morning. I was in the kitchen eating shelled walnuts. He’s in the silo, my father said, and hung a blanket over my shoulders. He looked over at the cook, shrugged his shoulders and the cook sighed and stirred the soup. I walked down to the pasture, my father trailing me. I scattered some corn and seed near the chicken coop, checked the horses’ hides for rain rot, and rolled a sow over in the mid-morning sun. The silo was abandoned now, the last dregs of corn rotted in its metal belly. Peter and I used to climb it as kids, reach the top and face one another, wipe the wintry soot off our arms and legs and look out over the world. Gene rented the land, kept a dozen cows here and there, brought his dogs through on summer days looking for something—anything—and he’d scamper over the fields, limp over really, because he was maimed not by war but by a thresher of some sort; we were never good with machine names and we’d watch father talk. They’d sit on the stone porch and shoot the shit and father’s voice would switch from city quick to country bark, and we’d hear him say things like: Told them to scoot off the land, it’s not deer season and I can hear the coon hounds from across the creek, and Gene would shift in his stance, swim in his denim, dogs panting at his knees, and they’d drink whiskey and smoke and then father would roam about and snap photos and various friends would come round. Some of them spoke of big projects, others just sat on their hands and they’d all be drunk by noon and roast a pig, and Peter and I would simply nod when spoken to, and once father let a woman make a metal sculpture on the land. She was there for days, passed out inside its metal core, and Peter found her wandering near the cows naked one night. Lost weekends, father would call them, and grin, and stand in the barn developing photographs of the eels he’d caught earlier in the creek. And now there was Peter, his body lying high on the fodder like a happy king on a pile of money. And I slunk over and poked him and nudged him. I do believe he’s drunk, I said, and father sighed and stirred the rotten feed with his foot, and we carried Peter to the barn and laid him out and father got the camera and took some photos. Place his arms so, arrange the hair. I like the halo effect—spun gold against hay and the black shoes stand out, dress shoes on a farm! You boys! Then Peter woke up and vomited and I helped him stand and we both walked towards the rabbit hutches, my arm under Peter’s, and I thought: so happy, if happy’s done right. And we took a rabbit out because it was rabbit stew night and Peter was better at killing things, better still when he was drunk, and I chose the best one, Knut his name was, a large solemn creature. This time last year there was a terrible frost and a lamb died, and seven rabbits. Father made us stand near the hutch and hold the rabbits while he snapped photos. Later when we saw the pictures, our faces were there, grey with cold, and the tops of our hands, but the rabbits were nowhere to be seen. He called the series Still Life with No Game.

Kara Jansson Kovacev is an artist living in New York City. Her iPhone/iPad drawings have been featured in the Washington Post, the Huffington Post, Beautiful Decay, Electric Lit’s Outlet, the Incliner and WNYC. She is a founder of iAMDA (International Association of Mobile Digital Artists). Her work can be seen at www.cloudbuilder.com