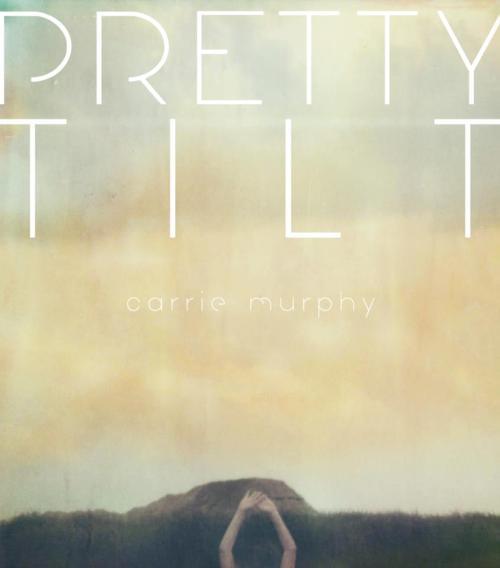 Carrie Murphy’s first full-length poetry collection, Pretty Tilt, is everything I have always wanted poetry to be but have had difficulty finding. I kind of just don’t like poetry; that’s nothing against poets or the work that they do, I’ve just never been able to connect with poetry the way I have with prose. Murphy’s poems, though…they blew me away in their ability to be lyrical and yet still manage to tell a story. They are honest, funny, visceral, and completely depictive of what it’s like to grow up as a girl.

Dedicated to “the girls I grew up with,” Murphy’s collection contains stunning representations of sex, teenage carelessness, and self-discovery. The collection opens with “Forsythia,” a creepily beautiful poem about a girl on her way to school. “the shame that rubs a hole in your cheek like a Sweetart does,” Murphy writes, combining that childhood candy with that sickening feeling of being groped. Lines such as this are what make Murphy’s collection so unique; she has an unsettling ability to remind you of the things you did when you were so young – the things you didn’t really think about then but cannot stop thinking about now.

“All we have in common is our colossal boredom,” opens “The Bitten Tongue.” I kept going back to that line, reading it over and over because it is so, so true. That’s what I’m trying to get at, I guess – how true these poems are. Although they will mostly reveal that truth to the girls-now-women who read them, there is still something to be had for everyone in the unnatural beauty of Murphy’s language. “The tiny silence I found in books,/then improvisation, becoming/the exercise: the icicle,/the bus passenger, the rock.” Lines such as the previous don’t have to do much except be read and admired; read, admired, and envied that someone found a way to say the thing you were always thinking but does it in such beautiful language.

My personal favorite of the collection – “Christmas Tree Skirt” – uses this kind of truthful language to tell a complete story in only three stanzas: “My skin is so hot I’m/rubbing up against cold/surfaces: anything I can find,/refrigerators, tabletops, the outsides/of cars.” I would reprint the entire poem here, but that would do Pretty Tilt a grave disservice; these poems need to be read as one, complete whole. Their loveliness, their ability to take up so much space in so few words, their total truthfulness – all of these things need to be realized at once.

And then read the entire collection over again for good measure.

Joellyn Powers (Books Editor) is a student in the MFA program for fiction at American University. Her work appears in Bluestem, Twelve Stories and Metazen, among others. You can follow her on Twitter @hipsternonsense, or on her blog about nothing at especiallyfreeing.tumblr.com.