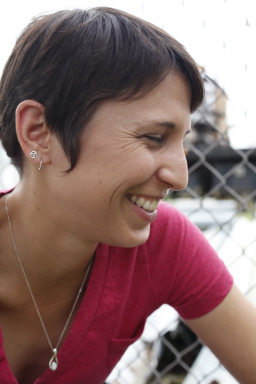 Micah Ling is the author of two books of poetry, Sweetgrass and Three Islands. She teaches at Franklin College and Butler University. In 2011 she claimed the Emerging Author prize at the Indiana Authors Awards. She founded Book Punch, a website that reviews books in 200 words or less, as well as Beat Jab and Film Hook. In addition to being a poet and critic, Ling runs. A lot.

Robert Stapleton: When you run and listen to music, are you building poems in your head? What role does the music play in this process?

Micah Ling: I sort of let music set the mood. I generally listen to my music pretty loud. I like to be overwhelmed by music. I go to as many concerts as possible (and started reviewing music for an alternative paper, mainly so that I could get into concerts for free). I really like to feel the music, as cheesy as that sounds. But I grew up going to concerts, and I grew up running, so maybe it makes sense. I started running when I was ten years old, and my first concert was around that same time: Grateful Dead (with Jerry) and Sting. For real. When I was in high school, I spent ALL of my money on concerts. As far as the poetry, I’m always building poems in my head. I’m not the kind of writer who sits down at the same desk at the same time of day to write for x-amount of time. I definitely write every day, but sometimes it’s a book or music review, and sometimes it’s a poem. Running is my planning stage: 45 minutes to an hour (or more) almost every day just to think. It’s a meditation.

Stapleton: Jezebel ran a piece last year about how women runners are punk rock.  As a runner and a poet, you must be double punk rock. What music or artists changed things for you?

Ling: Yeah, I read that. I totally agree. I’m pretty punk rock when it comes to running and writing (and being a woman). I generally dart across streets and run up and down stairs whenever I have the chance. Every run is kind of an adventure. I’m pretty surprised I haven’t been hit by a car or injured in some way. I’ve come close. Which I love. I can’t stand running indoors. I really only do it if I’m desperate. I’ll run in rain or snow unless I’m sick. This is mainly because I always see or experience something when I’m running. Whether that’s locking eyes with an interesting person for a second or (like yesterday), seeing a pigeon sitting on a statue that made the pigeon look like it had enormous stone feet. Sometimes (lots of times) those things turn into poems. Or lines in poems.

I have so many favorite bands and artists; I feel like I discover someone every day. Right now I’m listening to The Head and The Heart, Taken By Trees, Fun, and Bon Iver while I run. But next week it could be all hip-hop. When I race (I run approximately ten races per year, usually 10K, 15K, or half-marathons), I listen to pumped-up music. Race-day play lists are totally self-indulgent.

Stapleton: What current music are you excited about?

Ling: Because I lived in Bloomington for eight years, I’m pretty tuned into Secretly Canadian/Jagjaguwar. They’ve got some great artists (Bon Iver, Damien Jurado, Richard Swift, Taken By Trees). I’m also a huge fan of all of the recent collaborations that are going on in the mainstream music world. I always love to see what Danger Mouse is doing next.

Stapleton: Over at Beat Jab Reviews, you’ve merged music criticism and prose poetry. How does the sonic landscape of an album invite this form?

Ling: Beat Jab, Book Punch, and Film Hook are the three sites that I’ve been working on for about three years. We’re just getting ready to unveil the merging of the three as Ringside Reviews (ringsidereviews.com). That should be ready to rock in a matter of weeks. It’ll be nice to have all of the reviews on one site. But yeah, the general form is 200-words. I try to capture the experience of the album more than framing it around a traditional review form. Two-hundred words is really like a healthy paragraph, so not a lot of room. I’ve gotten to the point that I can write them without really checking the word count. Listening to a new album a few times and then writing a prose poem about it is probably my favorite thing to do.

Stapleton: If you created a soundtrack for your poetry, what would you include?

Ling: Funny you should ask that. I’m currently working on a poetry project that sort of does that. I recently invested in a nice turntable and have been buying all vinyl. The project involves prose poems that sort of mimic the Beat Jab reviews and capture the experience of the albums. I’ve been trying to figure out if it could turn into a book/album/set-list sort of package. Right now I’m still hatching that plan. So, I haven’t really answered your question, but it would probably be all over the place: Prince would be on there. Do you know that I have a thing for Prince? I do.